Guest Blog: Sequestration and the Cloud

(This post was provided by Praveen Asthana, Chief Marketing Office of Gravitant, a cloud service brokerage and management company)

Sequestration burst out of obscurity and entered our household vocabulary in 2013.  It got our attention because the impact of it is $1.2 trillion in automatic spending cuts from the Federal budget over the next ten years.  About $85B of these cuts will occur by September of 2013 – and these cuts are being disproportionately applied:  Once you exempt the sacred programs, what’s less sacred (like Federal I.T. spending) is going to get hit hard.  Forrester Research analyst Andrew Bartels expects that the Federal budget cuts will shave at least $12B out of 2013 U.S. tech spending (http://www.computerworld.com/s/article/9237240/The_sequester_will_hurt_tech_nationally).
So what’s to be done? Computerworld points out that “Dale Luddeke, chair of the Industry Advisory Council (IAC), an IT industry group expects to see a shift in government to things with cost savings attributes, such as open source, and agile development and cloud technology.”
Federal agency CIOs are already there:  At this year’s Cloud Computing for DoD and Government Summit held in Washington D.C. on Feb 26, Richard Spires, then CIO of the Dept of Homeland Security, said in a keynote that he was looking to take out $500M of IT spend from his $5B IT budget and was looking to cloud computing as a primary vehicle to accomplish this.
There you have it:  Cloud to the rescue.
This is not surprising, given that public cloud computing has been shown to reduce IT infrastructure spending by 37% (http://arxiv.org/pdf/1002.3492.pdf) or more.  And Cloud spending has the additional benefit of converting the capex model (“pay up-front”) to an opex model (“pay-as-you-go”) which gives much more flexibility.
This is not new news.  Cloud computing’s promise has been well known to the government which has had a ‘Cloud First’ mandate for two years now.  But implementation progress towards this goal has been tepid according to the GAO (http://www.gao.gov/assets/600/592249.pdf), due in part to lack of skills, guidance, tools, security and the need for new processes (such as cloud procurement).
However, there is one stand out government entity that has overcome these barriers and seen great success using cloud computing to reduce costs and improve agility:  this is the Dept of Information Resources of the State of Texas.
Nearly two years ago, the State of Texas implemented the Texas Cloud Self-Service Portal (http://www.dir.texas.gov/SiteCollectionDocuments/Texas.gov/ptco.pdf).
State Agencies who used the portal were able to reduce IT infrastructure costs by up to 30% and, more importantly, were able to significantly reduce deployment times for new IT resources from months to days.  This portal was so successful that it is now being extended to all 200 agencies in the State.
The key technology behind the Texas Cloud Self-service Portal was a Cloud Brokerage and Management platform that allowed for the easy onboarding and management of cloud computing resources.  The platform streamlined the assessment, design, procurement, provisioning, and real-time governance of solutions across hybrid cloud environments.
Sequestration is driving a new sense of urgency towards using cloud computing to save costs. Fortunately, Government agencies now have a roadmap and a tool set to enable them to easier onboard to and use cloud computing using the State of Texas example.  Seeing this, Agency CIOs have now recognized the power of a Cloud Brokerage platform and it is no wonder that every agency CIO that presented at the DoD and Government Cloud Computing summit this year stood up and said they would be implementing a Cloud Brokerage platform.
This leads us to believe that 2013 will be the year Cloud First gets real.
Praveen Asthana is Chief Marketing Officer of Gravitant, a cloud services brokerage and management company. Prior to joining Gravitant, Praveen was Vice President of Marketing and Strategy for Dell’s $13B Enterprise Solutions Division. 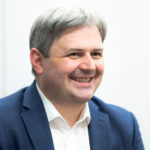 Mark O'Loughlin is the Managing Director of the CCC. Mark is internationally recognized as a global thought leader and published author in digital IT, cloud computing, DevOps, cloud service management, and IT Service Management.